Free MRI Review At Deuk Spine we’re happy to review your MRI and help you determine what treatment is right for you! Tap here to get started.

A herniated disc does not cause pain on its own. The pain occurs when the spinal cord or spinal nerve is irritated by the pressure or a chemical reaction from the displaced herniated material. Loss of function, weakness, tingling, and pain can be caused when there is pressure from the herniated disc on the nerve roots. This is referred to as ‘nerve root impingement’. The symptoms occur along the path of the nerve affected, usually the arms or legs.

Damage to a spinal disc such as a herniated disc or degenerative disc disease may put pressure on the root of the nerves near the holes from which they exit the spine. This is referred to as nerve root impingement and can result in a common condition or set of symptoms known as radiculopathy. Radiculopathy is commonly described as symptoms of:

Nerve root impingement when the pinched nerves cause radiculopathy. Delayed treatment may result in the nerve root becoming permanently damaged. This can result in irreversible weakness, numbness, paresthesias, pain or even atrophy of the muscles. The best treatment for nerve root impingement that is negatively affecting one’s quality of life is minimally invasive surgery of the spine, or Deuk Laser Disc Repair.

Nerve root impingement, or spinal stenosis, is best treated with minimally invasive endoscopic laser spine surgery so that the cause of the impingement is repaired while retaining the disc and mobility of the patient. Without treatment the nerve root may become permanently damaged causing weakness, numbness, paresthesias, pain or even atrophy of muscles.

Learn more by watching the video below:

Are you or a loved one experiencing nerve root impingement pain or other back symptoms? Deuk Spine Institute is always accepting new patient inquiries. To learn more, contact us or give us a call at 1-800-FIX-MY-BACK. 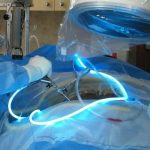