Ara Deukmedjian, M.D. has been recognized as an Expert Network Distinguished Professional. 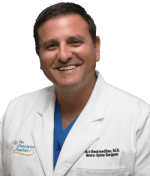 Ara Deukmedjian is a renowned neuro-spine surgeon based in Melbourne and Titusville, Florida. Known to his patients as Dr. Deuk, he is a leading expert in the treatment of neck and back pain as the CEO and Founder of Deuk Spine Institute, which was recently selected as the first Spine Center of Excellence in the world by Johnson & Johnson. With twenty years of experience, he has been listed as the best back surgeon by Laser Spine Surgery Reviews and is widely regarded as a pioneer in minimally invasive laser and endoscopic spine treatment through the revolutionary procedure that bears his name: Deuk Laser Disc Repair. Dr. Deuk’s cutting edge techniques are backed by an available warranty guaranteeing results along with a 95% success rate.

Following in the footsteps of his father, a prominent surgeon in the U.S. Army, Dr. Deuk knew that he wanted to go into medicine from a very young age:

“Growing up, I had the benefit of going to my father’s office and seeing patients being treated. Seeing how the interaction between the doctor and patient can truly help people was a turn-on for me. I knew that’s what I wanted to do with my life—to help people get out of suffering and pain. That’s why I ended up going into spinal surgery, because we’re able to cure some of the most painful neck and back issues.”

With his sights set on a career in medicine, Dr. Deuk enrolled in the University of Southern California’s School of Medicine where he graduated first in his class with “Highest Honors” and became the first medical student in the school’s 110-year history to be honored with a teaching position while still studying. After earning his medical degree, he went on to complete his internship and residency under the mentorship of the distinguished Dr. Albert Rhoton at the University of Florida at Shands, one of the top three nationally recognized neurosurgical training programs. He rounded out his training with a fellowship funded by the National Institutes of Health.
Today, Dr. Deuk is perhaps most renowned for his work in minimally invasive laser and endoscopic back and neck pain treatment where patients can go home the same day. After recognizing a need for improvement in neurosurgical procedures, he developed a technique called the Deuk Laser Disc Repair, a modern alternative to spinal fusion surgery and outdated laser surgery. The revolutionary procedure is performed by using an endoscope to gently separate the muscle and ligaments before carrying out disc repair with a very precise laser, eliminating the need to cut bone.
Dr. Deuk’s excellent care does not stop at his state-of-the-art laser and endoscopic techniques; he also offers comprehensive programs for patients that tie in therapy with interventional treatments and surgery so that they don’t have to visit multiple doctors in multiple locations. He has personally performed over 2,000 cervical decompressive discectomies at his one-stop-shop, as well as over 1,000 herniated disc treatments and over 300 laser spine surgeries. His methods, which treat everything from bulging discs and sciatica to spinal stenosis and everything in between, have had a 95% satisfaction rate, and have earned him the Patients’ Choice Award on Vitals, among numerous other honors.
As a leader in his specialty, Dr. Deuk maintains a unique vantage point from which to keep his finger on the pulse of prevailing trends within neuro-spine surgery. In particular, he has noticed a big shift from performing spine surgery at hospitals to performing them at surgery center such as his own. He noted:

“By doing the surgeries outpatient instead of sending patients to a hospital, we’re seeing lower infection and complication rates. As a matter of fact, in the three years that we’ve been doing outpatient spine surgery here at Surgery Center of Viera, we’ve had zero infections or complications. There are very few doctors that can claim that kind of success rate.”

Beyond his groundbreaking practice, Dr. Deuk is dedicated to making sure that all patients across the country have access to great health care and to him, that starts with well-educated physicians. As such, he strives to advance medical knowledge and teach the next generation of spine specialists as an Assistant Professor of Neurosurgery at the University of Central Florida’s College of Medicine. Additionally, Dr. Deuk has frequently been invited to speak at the Southern Neurosurgical Society and has served as a reviewer for several contemporary spine journals such as the Surgical Neurology International and the Laser and Photomedicine Journal, in addition to his own publications on a wide variety of neurosurgical topics. This mission is further carried out through his non-profit, Deuk Spine Foundation, an organization created to support the continued research into, and development of, new and innovative techniques to enhance spine health.
With two decades dedicated to medicine behind him, Dr. Deuk shows no signs of slowing down. In light of the Deuk Spine Institute having recently been selected as the first Spine Center of Excellence in the world by Johnson & Johnson, Dr. Deuk hopes to aid in the development of many other Centers of Excellence throughout all of the large cities in the United States by partnering with other surgeons who recognize all that he has done for the field and want to be involved.